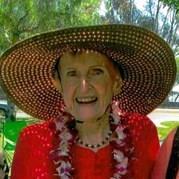 Grace Elizabeth Thomas was born on May 19, 1923, to parents Milton and Lorraine Dowse in Kenosha, Wisconsin.  She had two older half-brothers, Robert and Milton, Jr., from her father’s first marriage and an older sister Ruth.  Milton Dowse, Sr. was a realtor and the family suffered losses during the Great Depression.  However, he soon regained his business, but the family never forgot the many lessons learned in stretching a dollar and saving leftovers for another meal.

Always a good student, Grace graduated first in her class from Kenosha High School.  She then took secretarial courses from Spencerian Business College in Milwaukee in typing and shorthand.  Grace worked for Mac Whyte in Kenosha before enlisting in the Marine Corps in April 1944 to serve during the National Emergency years.  She was stationed in San Diego as a clerk-typist and when asked what her main job was, she replied, “fighting off the marines!”

Grace left with the rank of corporal in March 1946 in order to marry Oscar Thomas, who had come home to San Diego after fighting at Omaha Beach during the D-Day Normandy Invasion and the Battle of the Bulge.  They met at Central Christian Church at a Sunday evening young people’s group.  Grace and Oscar attended Chapman College (Los Angeles) on the GI Bill and lived in a Quonset hut on campus.  In 1947, Elizabeth Ann (Libby) was born.  After Oscar graduated from Chapman College, the family moved to the San Diego area and eventually purchased three quarters of an acre in Casa de Oro. As the house construction expanded, so did their family with three sons:  Evan Lloyd (1951), Philip Edward (1953), and David William (1954).  Oscar became a teacher and taught at the Julian High School for two years.  Grace worked as secretary of the La Mesa Methodist Church for several years.  The family took several summer car trips across the United States, taking different routes which always included time in Wisconsin with Grace’s family.

In 1981, Grace graduated from SDSU with a BA in European Studies.  Learning four languages (Spanish, French, Italian and Portuguese), she continued taking classes over the next 30 years and made use of her linguistic skills as she and Oscar bicycled through Europe.  After Oscar died in 2005, Grace reconnected with Jerry McDaniel and his family.  The two families first met over 50 years ago at the La Mesa Methodist Church. In 2009, Grace and Jerry had a commitment ceremony at First United Methodist Church.  Grace and Jerry enjoyed traveling to Costa Rica and Alaska, attending their Koinonia class, and spending time with both families.  Jerry passed away in 2016.