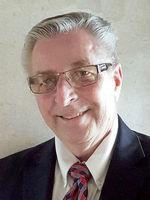 Jerry Bain, 77, of Kenosha passed away peacefully on Friday, September 16, 2016, at United Hospital Systems-Kenosha Campus, surrounded by his loving family.

Born in Kenosha on February 15, 1939, he was the son of the late Louis and Nina (Nolan) Bain. He graduated from Bradford High School in 1957 and attended the University of Wisconsin.

He was a member of the Wisconsin National Guard during the Berlin Crises until he was honorably discharged with the rank of Sgt.

In 1961 he was united in marriage to Patricia Sepanski at St. Casimir’s Catholic Church. She preceded him in death on August 20, 2015.

Jerry was employed as the Executive Meeting and Special Event Producer for Abbott, retiring in 1998 after 33 years of service. Following his retirement, he was under contract with Abbott as a Consultant for five years until 2003. On November 1, 2003 he was appointed Vice President of Production and Meeting Development for MedEd-Link, Inc., a Michigan based medical meeting company, retiring from that position in 2008.

He enjoyed traveling, hunting, boating and spending time at the summer home on Castle Rock Lake.

Jerry is survived by his sons, Michael (Suzanne) and Mark, both of Kenosha, and Jon of Menomonee Falls; and five grandchildren, Justin, Amber, Jamie, Alexis and Courtney.