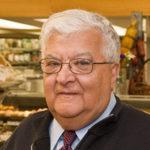 Ralph J. Tenuta, age 87, passed away peacefully on Wednesday, January 15, 2020.  Ralph was born in Kenosha on May 26, 1932, the only child of the late John and Lydia (Conforti) Tenuta.  He attended Bain Elementary School, Washington Jr. High School and was a 1950 graduate of Mary D. Bradford High School.  Ralph was extremely honored to have been named a Distinguished Alumni by the Bradford Alumni Association in 2015.  He continued his education at UW-Extension and Marquette University until he left school to work alongside his father in establishing Tenuta’s Delicatessen and Liquors, which opened on September 1, 1950.  He “unofficially” retired on December 24, 2014.  Through his dedication and hard work, the store has become a cherished treasure in the Kenosha community and beyond for 70 years.

On April 16, 1954, Ralph was united in marriage to Margaret “Margie” Landre.  They enjoyed 55 years of marriage together and proudly raised seven children.  Sadly, she preceded him in death on March 25, 2010.

Ralph and Margie were long time members of St. Mary Catholic Church.  He was involved as a stronghold in the community.  He was involved in countless boards and committees throughout the community.  He was a member of both the Kenosha Area Chamber of Commerce and a charter member of KABA and was awarded “person of the year” designation by both.  He was a charter member and founder of the Kenosha Boy’s and Girl’s Club, Kenosha Rotary West and 52nd Street Businessmen’s Association.  Ralph received the distinction of a Paul Harris Fellowship by Rotary International.  He was a founder of the American State Bank and had served as Chairman of its Board of Directors and remained on the board following the bank’s acquisition by Johnson Bank.  He also served for 20 years as chairman of the Wisconsin Banking Review Board.

He was instrumental in establishing the University of Wisconsin Parkside and served as president of the University’s Benevolent Foundation.  He was honored to receive the UW-Parkside Lifetime Recognition Award.  A member of the Italian American Society and the Italian Business & Professional Association, he was honored as man of the year by both organizations.  He served as a Carthage College Trustee for 25 years and received the 2006 Carthage Flame Award.

One of his proudest accomplishments was his mentoring and his genuine care for the hundreds of young employees who passed through the doors of Tenuta’s.

The Tenuta family has requested that memorial remembrances be directed to either Hospice Alliance (10121 Prairie Ridge Blvd., Pleasant Prairie, WI 53158) or the Ralph and Margaret Tenuta Scholarship Funds at either Carthage College, UW-Parkside, or Gateway Technical College.

Due to an expected large turnout for Ralph Tenuta’s visitation and funeral services, along with Carthage College admissions and athletic events, there will be limited parking on campus this weekend.

Visitation will be 4:00PM to 8:00PM on Friday, with the funeral Mass beginning at 10:00AM Saturday, in A.F. Siebert Chapel on the Carthage campus, 2001 Alford Park Drive.  Parking will be first-come, first-serve in the South Lower Lot, North Lots and Pike River Lot.

Shuttle services will end about one hour after each event.

Published in the Kenosha News on Friday, January 24, 2020