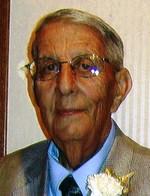 Chester Salituro, 82 of Kenosha, died peacefully at his home on Monday, December 23, 2013, surrounded by his loving family.

Born Cesare Salvatore Salituro in Rende, Province of Cosenza, Italy on December 15, 1931, he was the son of the late Settimio and Concetta (DeMarco) Salituro.  As a young boy, Chester and his family came to America, moving to Kenosha in 1934.  He attended local schools and graduated from Mary D. Bradford High School in 1950.  He subsequently attended U.W. Madison.

Chester began his working career as a shoe shine boy in downtown Kenosha at the Busy Bee Shoe Repair.  For over 30 years, he was employed as a custodian with the Kenosha Unified School District, retiring in 1995.

Once referred to as the Rummage Sale King of Kenosha, he chose to forego vacations, and instead spent his leisure time bargain hunting and socializing at local gatherings.  He also enjoyed watching the Green Bay Packers and fixing things in his home and his children’s homes.

A Mass of Christian Burial was celebrated on December 28, 2013 at St. Mary Catholic Church, followed by entombment at All Saints Mausoleum.