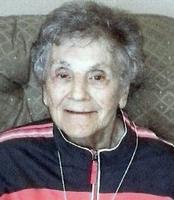 Doris Jean Frederick, 91, of Kenosha, passed away peacefully on Saturday, December 8, 2018, at her daughter’s home in Middleton.

Born in Herrin, IL, on March 16, 1927, she was the daughter of the late William and Beulah (Roberts) Hawkins. She moved to Kenosha as a young child and was educated in local schools.

Doris was briefly employed at Simmons in their office.  For 22 years she worked at Loeffler’s Hardware store, which later became Schaffer Hardware and Raymond Hardware. Doris was a member at First Baptist Church and participated in their “working hands” group.

Doris was an avid golfer and a longtime member of the Maplecrest Tee-ettes League.  She golfed until she was roughly 85 years old and had notably achieved two career holes-in-one.  Doris also enjoyed sewing, crafting, traveling, playing cards with her friends and spending the winters in California.

In addition to her parents and husband, she is preceded in death by her sister, Alfreda (Andrew) Jacobson.