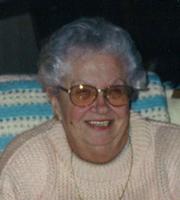 Elizabeth J. “Betty” Binninger, age 82, a resident of St. Joseph’s Home, passed away on Sunday, March 25, 2007, at Aurora Medical Center.  Born on September 9, 1924, in Waukegan, IL, she was the daughter of the late Elmer F. and Mary E. (Jadrich) Rogan.  A lifelong resident of Kenosha, she attended St. James Elementary and was a graduate of Kenosha High School.

On June 28, 1947, at St. James Catholic Church Rectory, she was united in marriage to Roger G. Binninger.  They were blessed with three beautiful daughters.  Roger preceded her in death on March 15, 1999.

For many years, Betty was employed as a secretary with the Kenosha Unified School District, retiring in 1987.  She was a member of St. Anthony Catholic Church and their Altar Society.  She was also a member of the Kenosha Senior Citizen Club, where she enjoyed ceramics.  Betty was a volunteer with the Shalom Center Soup Kitchen through Immanuel Methodist Church.  She enjoyed playing pinochle with the same couples group for over 40 years.

A Mass of Christian Burial will be celebrated on Wednesday, March 28 at 9:30AM at St. Joseph’s Home Chapel (9244 29th Avenue, Pleasant Prairie). Entombment will follow in Sunset Ridge Memorial Park.