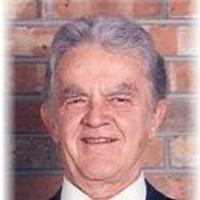 Dick was born on December 26, 1923 the son of Albert and Genevieve (Holihan) Johnson. He graduated from Kenosha High School and Marquette University.

During WWII, Dick was a B17 Bomber Pilot stationed in Chelveston, England.  After graduating from college, he was a traffic Manager for Simmons Company in Kenosha, Munster IN, and Janesville, retiring in 1982.

Dick liked golf, biking, and hiking. He and his wife, Joanne, enjoyed visiting national parks and biking on trails. His gentle and caring spirit will be with us forever.

His siblings are (the late Jerry) and Audrey Johnson, Mary (and the late Chet) Hylinski, Barb and Russ Ancevic, Jim and Carole Johnson, Tim and Linda Johnson, and Dennis and Mary Johnson.  Dick is also survived by a special cousin, Gene, and many nieces, nephews, and friends.

Dick was preceded in death by his first wife, Anetha.

Visitation will be Monday, February 23, 2009 at 10:00AM at the First Methodist Church on Sheridan Road and 60th Street (please use west entrance), with services at 11:00AM.  Burial with Military Honors at Sunset Ridge Cemetery will be private.

Memorial contributions may be made to the American Heart Association or the charity of one’s choice.