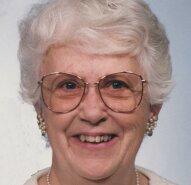 Hellen B. Eisenhauer, 98, died at Hospice Alliance Hospice House in Pleasant Prairie, on October 10, 2020.  Born in Daggett, MI on July 24, 1922, she was the oldest daughter of Alfred and Blossom (nee:  Goodfellow)  Conard and moved to Kenosha, WI at a young age.  She was educated at local schools and graduated from the former Kenosha High school.

On November 7, 1942, she married Harold F. (Brod) Eisenhauer at St. George Catholic Church. Together they raised their family.

She was a member of St. Mary's Catholic Church for over 60 years.

Hellen loved traveling, and she and Harold spent much of their time visiting family and seeing much of this beautiful country.  They attended the Army Reunion every year and met with other veterans from World War II.

She belonged to the pinnacle club when she was young and loved playing cards after she retired with many of the friends she worked with. She loved sewing and crocheting, even sometimes selling her sweaters and baby afghans at local craft sales. She worked at American Motors for almost 20 years until she retired.  She was very active in the union and served as a Union Stewart.  Before that she worked at Coopers, which later became Jockey International.

Due to Covid concerns, private funeral services for the family were held at the Proko Funeral Home with entombment following at All Saints Mausoleum.