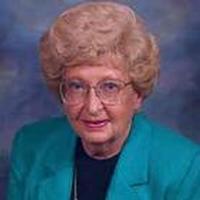 LaVerne F. Guttormsen, age 86, of Kenosha, passed away Wednesday, April 9, 2008 at her residence.

Born on May 28, 1921 in Kenosha, WI, she was the daughter of the late Edward and Bertha (Lehman) Flug. LaVerne attended Lincoln Elementary and Lincoln Jr. High School. She graduated from Kenosha High School in 1939 and Trenary College of Commerce in 1940.

On June 16, 1943 she married Norman C. Guttormsen at St. John's Lutheran Church in Fayetteville, North Carolina. He preceded her in death on June 9, 1993.

LaVerne was employed at the Simmons Company as an executive secretary while her husband served overseas during World War II. She then was a homemaker and in later years served as a part time bailiff for Circuit Court Judge S. Michael Wilk.

In 1981, LaVerne was appointed by Governor Lee Sherman Dreyfus to serve a three-year term on the Wisconsin State Compensation Panel.

LaVerne was an avid golfer and bridge player. She enjoyed gardening, trips to Northern Wisconsin, and following the Packers and the Brewers. LaVerne was fiercely devoted to her family and thoroughly enjoyed her time spent with her beloved grandchildren and the company of her parakeet, Joey.