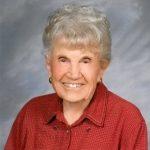 Clare Ausen Westergard died April 19, 2014 at the age of 100.  She lived independently since the death of her husband, Stanley, in 1980, until early in 2014.  She and her family were thankful for the special care provided her in the last few months of her life by the staff at Ridgewood Care Center and Hospice Alliance.

She was born in Eau Claire on September 24, 1913 and then lived in Kenosha from 1919 until her marriage in 1938. Clare graduated from Kenosha High School in 1931 and continued her formal education at Florida State College for Women in Tallahasee, FL.

She was thankful for the many friends she made through her years living in Kenosha and Racine.  Clare's last full-time employment was at Twin Disc, Inc. in Racine where she worked as an executive assistant for 22 years until her retirement in 1986.  During retirement she became a Master Gardener and worked as a plant specialist at Mileager’s and Town 'n Country Nursery. She served as president of the Racine Garden Club for 4 years, historian of the Atonement Lutheran Church Garden Club, wrote a column, "Green Thumbs Gardening", for the Racine Reporter for several years. Clare was a member of Atonement Lutheran Church since 1949. She was a volunteer as well as serving as a class parent, touching the lives of many young children. Some of those youth grew to become active adult members serving Atonement today. Clare was also active in scouting throughout her life.

A memorial service was held Saturday, May 10, 2014 at Atonement Lutheran Church.