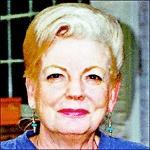 Virginia “Sheila” Winkler (nee:  Macdade) died peacefully in her sleep on December 14, 2016 in Springfield, VA. She was preceded in death by her husband Thomas R. Winkler, and her twin, Winzor MacDade. She is survived by her sister, Faith MacDade, and niece, Jane Townsend.

She was born January 30, 1933, in Kenosha WI to Winzor and Virginia MacDade and graduated from St. Luke's School of Nursing, Chicago.  She then moved to Washington, DC, where she met and married Thom Winkler.  They lived on North Dittmar Road in Arlington, VA for over 50 years.

Sheila pursued her nursing career at George Washington University, Fairfax Hospital, and the World Bank. She enjoyed and supported the fine arts, particularly opera and architecture.

Sheila's husband Thom died in March 2013. He was a radio and TV producer at WMAL-TV and later was a Senior Investigator for the FCC. He served the American Heart Association in various capacities, including Chairman of the Board in 1992.

A joint memorial service celebrating the lives of Sheila and Thom was held on January 30, 2017 in the Bethlehem Chapel of the Washington National Cathedral.  In lieu of flowers, donations may be sent in their names to the National Cathedral building fund.