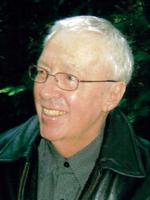 When John McEvoy was 10 years old, he won a Father’s Day essay contest with a description of his dad that suggested McEvoy had the potential to become a writer.

His mother was an avid horse racing fan, and the boy would accompany her and the rest of the family on the three-hour drive down Highway 41 from their home in Kenosha to Washington Park in south suburban Homewood, and there he got hooked on the horses.

As an adult, McEvoy’s passion for horse racing enabled him to achieve his potential as a journalist, as a longtime editor with the Daily Racing Form and as an author of mystery novels centered around a horse track.

McEvoy, 83, died of heart failure Monday while in hospice at Evanston Hospital, said his wife of 60 years, Judy.

In 1964, he was hired to work as a copyreader and writer for the Chicago-based Midwest Edition of the Daily Racing Form, and he was promoted to editor in 1979.  He remained editor until 1994, when the 100-year tradition of a Chicago-produced Midwest Edition for the national publication ended as a new owner, Prime Media, shifted operations to Phoenix, Ariz.

McEvoy chose not to leave his long-time home in Evanston and assumed a new role as senior correspondent for the Form, profiling the likes of Hall of Fame jockeys Earlie Fires and Randy Romero, Hall of Fame trainer Jack Van Berg and Ernie Poulos, the colorful Chicago-based trainer of 1991 Horse of the Year Black Tie Affair.

“John was that rare combination of expert editor and superb writer,” said Ira Kaplan, who has spent three decades as an editor and a reporter for the Form after being hired by McEvoy to work on the copy desk in 1989.  “I never heard him raise his voice at any of the editors or writers he supervised.  John would calmly and kindly make his point, and you would leave his office or hang up the phone feeling good — and a little bit smarter.  That kindness earned him respect from his colleagues and devotion from his employees.”

After he ended his career with the Form in the late 1990s, McEvoy immersed himself in his second career as an author of fiction and nonfiction horse racing books.

“He was like a poor man’s Dick Francis, and I mean that in a very complimentary way,” said retired Los Angeles Times racing writer Bill Christine, likening McEvoy to the renowned author of mysteries with a horse racing motif.  “He wrote in that way. John had quite a career as a novelist after leaving the Form.”

McEvoy was born in Kenosha on May 10, 1936, and grew up there.  He was a talented high school basketball player and editor of the school paper.

He went on to earn his bachelor’s and master’s degrees at the University of Wisconsin in Madison, where he was the sports editor of the student newspaper, The Daily Cardinal.

After college, McEvoy and his wife moved to Columbia, MO, where he taught English at Stephens College for three years.  His wife said he decided that a career in academia wasn’t for him, so they returned to Wisconsin where he worked for the Milwaukee Journal and Kenosha News.

“Then he got a call from the Racing Form offering him a job in Chicago,” Judy remembered.

He took the job, and it became a labor of love.  Coinciding with his promotion to editor in 1979, he oversaw the complicated conversion of the Form’s Midwest Edition from a hot type (molten metal typesetting) publication to a cold type (photo composition) publication.

McEvoy was a student of racing and a racing historian.  He loved to handicap the races in the office and then bet on the horses when he went to the track.

“He was a small-time bettor, but he would spend hours handicapping each card,” Kaplan said.  “I don’t think John cared so much about money when he won.  He just loved the fact that he had solved the puzzle.”

McEvoy was fascinated by the racetrack melting pot of intriguing individuals and colorful characters — the inveterate horseplayers, the trainers and jockeys who brought out the best in the thoroughbreds, the horse owners at the top of the socioeconomic ladder and the grooms and hot-walkers on the bottom rung in the backstretch.

That keen awareness of their diversity manifested itself in his six horse racing mystery novels published by Poison Pen Press.

His novel “Close Call” had an Illinois racing backdrop.  A review in the Chicago Tribune described it as an “insightful depiction of the daily ebb and flow of racetrack life.”

In reviewing “Riders Down” for Booklist, Dennis Dodge wrote that McEvoy “gives us characters we can care about and suspense enough to make the blood race like a stakes winning sprinter.”

Before focusing on mystery novels, McEvoy wrote a few nonfiction books, the most notable of which is “Great Horse Racing Mysteries: True Tales from the Track.”  He chronicled the career of the Hall of Fame horse Round Table in the Eclipse Press Legends series, and collaborated with his daughter, Julia, an editor at the San Francisco public radio station KQED, on “Women in Racing.”

McEvoy also was an award-winning poet. His wife was the subject of his love poem, “The Beholder” and he penned “Poem for Radiology Ladies” in 2007 after a bout with esophageal cancer.

Sometimes he wrote poems with his tongue tucked in his cheek, as was the case with “The Horseplayer’s Prayer,” which begins: “Dear God, and you, too, Moses/don’t let me get beat by so many noses.”

When he was in his mid-70s the one-time college English teacher went back to the classroom, only this time on the elementary school level, serving as a volunteer reading tutor for second graders at Washington School in Evanston.

His daughter said he loved telling the story of a second grade boy who asked McEvoy how old he was, and when he answered “75,” the boy looked at him wide-eyed and asked, “Aren’t you dead yet?”

“What a gentleman and smart, great guy,” said Alan Henry, a former Sun-Times editor now working as a freelance writer.  “We went to lunch about once a year for the past 10-15 years. I always really, really enjoyed his company.”

In addition to his wife and daughter, McEvoy is survived by another daughter, Sarah; a son, Michael; two sisters, Bernadette and Mary; and nine grandchildren.