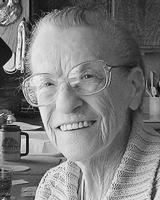 Shirley served in the United States Navy as a WAVE during World War II. She came to live in Southern California after her marriage to her loving husband Thomas R. Duteau.  Shirley will forever be remembered fondly by her family and her many friends.  She is survived by twin daughters, Suzanne (Ben) del Villar of Las Vegas, NV, and Kathleen (Tim) Denny of Lomita, CA; five grandchildren; and three great-grandchildren

Shirley was preceded in death by her beloved husband, Thomas, and sons, Thomas Lee and Alan Ray.

Services were held on November 20, 2017 at St. Margaret Mary's Catholic Church in Lomita, CA, followed by private interment at Holy Cross Cemetery in Culver City.  The family gives a special thank you to Ziba Hospice for their compassion and support.  The family also wishes to extend their heartfelt gratitude to all her caregivers during her six year stay at the Twin Palms Homecare of Lomita, California.  In lieu of flowers, the family has requested that a donation be made to St. Margaret Mary's Catholic Church's Christian Service Program in Shirley’s name.

Published in Daily Breeze on November 8, 2017