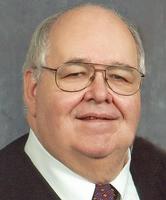 Jack Eisenhauer, 74, died at home on Thursday, February 18, 2016, surrounded and cared for by his wife, daughters, sons-in-law, grandchildren and sister-in-law, Chris, and holding the hand of his high school sweetheart, best friend and wife of 53 years, Sue (Schmelling).  He was born on March 13, 1941, in Kenosha, Wis., the second son of John Thomas Eisenhauer and Lois Lila (Hollenbeck) Eisenhauer.  He was educated in the Kenosha public schools, graduating from Mary D. Bradford High School in 1959.  Jack and Sue were married in 1962.  Together they raised four daughters, Janet, Nancy, Jean and Mary Louise.  Jack graduated from the University of Wisconsin in 1964 as a Chemical Engineer.

At the time of his death, Jack was a Construction Manager at Unity Point Health Meriter Hospital in Madison, Wis. He worked at the hospital for nearly 15 years.

Prior to joining Meriter, Jack spent the majority of his working life in the petro-chemical industry, holding various positions in research, business and manufacturing.  He served as the plant manager at several petro-chemical plants, including one in Clinton, Iowa, a plant which he helped to design and build at an early stage in his career.  Jack was a member of the American Institute of Chemical Engineers for nearly 50 years.  In 2000, Jack retired from the petro-chemical industry and joined Mount St. Clare College (now Ashford University) in Clinton, IA, where he served as the Assistant to the President and the Director of Institutional Development for two years.

Jack also spent a great deal of his time volunteering for the various communities in which he lived.  In Clinton, one of his favorite projects was the "Symphony of Lights," a Christmas spectacular lighting event in Eagle Point Park.  In recognition of his community work over the years, Jack gratefully received several awards, including:  the Clinton County Bar Association Liberty Bell Award for Community Service (2000); the Mount St. Clare College Distinguished Service to the Community Award (1997); the Gateway Chamber of Commerce Community Service Award (1997); and the Rotary International Community Service Award (1997).  He received the Key to the City of Clinton, Iowa, in 2002.

Jack was an avid Badgers, Hawkeyes and Packers fan. He also loved spending time with his grandchildren. Talking, listening, laughing, playing games, fishing and sitting around the fire pit on a summer evening.