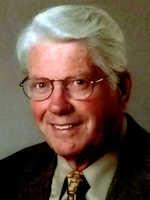 Born in Kenosha on September 20, 1930, he was the only child of Henry and Agnes (Gangsted) Stockdale.  A lifelong resident of Kenosha, he was educated in local schools and graduated from Mary D. Bradford High School in 1948.  He was a member of the Bradford Alumni Association and had served on its Board of Directors for many years.

Bob served in the US Army from 1951 until his honorable discharge in 1953.

On November 14, 1955, he married Phyllis Reiter at Trinity Lutheran Church.  Together they enjoyed traveling and running P & R Estate Sales.

Bob was an avid musician.  Not only did he enjoy listening to classical music, he also played and was an instructor to many students over the years.  He began his career in music working at Music Center for many years, then went on to own and operate the Robert Wayne School of Music.  He continued to teach classical piano until 2015.

Aside from music, Bob loved skiing and spending time with his friends.  He was a member and past president of Kiwanis Club and enjoyed getting together with the members of the 306 Club.

He is preceded in death by his parents; and his beloved wife, Phyllis, on August 29, 2011.

Published in the Kenosha News on Tuesday, November 10, 2020