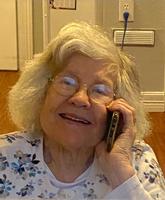 Our beloved Mom/Grandby, departed this life after saying goodbye to many of her family on a Zoom phone call, on Sunday, November 8, 2020.  She was 90 years old.  Ida Mae “Shelby” was born in Kenosha, WI on April 8, 1930.  She graduated high school and attended Butler University in Indianapolis, Indiana.  In the summer between Shelby’s freshman and sophomore year at college, some high school friends introduced her to Robert Bockeloh.  They married on July 7, 1951 in Kenosha.  Like Robert, Shelby was raised with ‘old-fashioned’ Midwestern values: Love and service to God, country, family and friends. This simple yet powerful philosophy guided them through life and which they instilled in their family.

Shelby and Robert left the Midwest for the East Coast in 1953, after Robert accepted a job with General Electric’s (GE) newly formed computer division.  They frequently moved the family because of different GE positions that Robert held, but Shelby always assured that the move caused minimal disruption to her happy family life.  Having 3 children – Bertie, Mark and Shelby Jean – filled her life with joy.  While raising her children, Shelby learned to sew and became quite the seamstress.  Loving flowers, Shelby always had fresh flowers in the house and became a Master Gardener.

Shelby had a passion for her ministry, bridge, bowling, golf, watching Jeopardy for the last 38 years and reading novels.  Shelby also had a wonderful dry sense of humor, at times witty, but always delivered with an impish smile and a wink of an eye.  Happy family occasions always included bowling, and Shelby looked forward to Christmas when all her children and grandchildren would gather and go bowling!

Shelby was a devout Lutheran and sought to serve the Lord.  She and Robert were humanitarians, devoted to helping those around the world live a better life, promoting equal rights and restoring the environment.  Wherever they moved, they were involved in promoting those initiatives, starting when they lived in Rye, New York.  Shelby also believed in the power of prayer and belonged to huge prayer groups with the advent of email.  When Saigon fell in 1975, Shelby joined the Westchester County, New York Refugee Placement Task Force to assist relocating refugees who had fled the communist Viet Cong.  Robert and Shelby practiced what they preached and brought their 3rd daughter, Pame, into our family.

Shelby and Robert moved to Florida in 1988 after Robert took early retirement from GE.  They enjoyed the sunshine and the golf.  In 1994, Shelby and Robert moved to the Greater Houston area when Mark and Shelby Jean had new babies.  Shelby so loved watching her grandsons grow up!  Although they were so involved in volunteer work, Shelby and Robert always had time to attend their 3 grandsons’ sporting events – baseball, basketball, football and lacrosse.  She and Robert often traveled to California to see their grandchildren: Nathan, Arlena, Eric and later Sam and attended many of their soccer games.  Shelby and Robert had joined “Lord of Life”, Lutheran Church in the Woodlands after coming to Texas.  Shelby was very active member of the church.  She served as the church’s representative to the Texas Gulf Coast ELCA Synod meetings.  She participated in the “Senior Sages” whose objective was focused on serving those in need in Houston communities – food, housing, and clothing.  It was not unusual for Shelby to be at a Food Bank giving out food or painting a house with Robert supporting Habitat for Humanity.  Shelby was very concerned about the Ministry abroad.  Robert and she housed many missionaries over the years as they came to the US for training.  They enjoyed teaching them about America, in turn, Shelby learned about the trials of being a missionary in many different societies in countries that were incredibly poor, many being in Central Africa.

Shelby and Robert’s greatest joy was spending time with their family including their 4 children:   Bertie Bockeloh Chuong (Jackie, husband deceased), Mark Allen Bockeloh (Alison, wife), Shelby Jean Bryan (Brad, husband) and Pame Banavong (Noi, husband); 6 grandchildren:   Brett Bockeloh (Christine, wife), Kyle Bockeloh (Brittany, wife), Sam Bryan, Nathan Banavong, Arlena Banavong, Eric Banavong and the newest great granddaughter, Claire Bockeloh.  Shelby’s brother, Homer (Buddy) Shelby of Largo, Fla died a decade ago. They loved to travel and would spend time each year with their children and grandchildren on the east and west coast. They also took a couple of international trips to Germany and The Holy Land and Greece.  Upon return, Shelby enjoyed telling her family about all the awesome places they had visited as she recounted scenes from the Bible.  Most summers, Robert and Shelby would join Bertie and Jackie and friends at Tanglewood, the BSO summer home and Yankee games.  In 2009, Shelby and Robert moved to Brenham where they joined Salem Lutheran Church, and Shelby continued to use her exceptional sewing skills to start making quilts as a member of the Salem Church Quilting Club.  She continued to make quilts for Lutheran World Service and sent quilts all over the globe until 2019.

Robert, her husband, the love of her life, predeceased Shelby.  They had been married for 62 years.  Shelby then moved to Alpine, CA, where she joined her daughter Shelby Jean and her family.  Shelby joined St. John’s Evangelical Church in El Cajon and soon had many parishioners at St. John’s making quilts!  In September 2019, Shelby “retired” to Brookdale-at-the-Heights in Houston, TX where she loved the staff who cared for her.