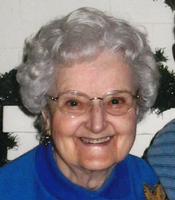 Marge was born in Kenosha on Feb. 15, 1921, the only daughter of the late Jacob and Mary (Sabena) Lulack. She attended Kenosha schools and was a 1939 graduate of Kenosha High School.

She proudly served our country in the U.S. Coast Guard enlisting in 1944 and receiving her discharge in 1946.

Marge was employed with Jockey International for over forty four years, retiring as an accounting clerk in July of 1983.

Marge was extremely active in her community serving actively with Somers David Leet American Legion Post # 552, the Kenosha Senior Citizens Center, Trinity Lutheran Seniors, the Friends of Hawthorn Hollow, the Kenosha County Historical Society, the Friends of the Museum, with which she and her husband traveled extensively, the WI Historical Slovak Society, and the Slovak – American Cultural Society of the Midwest.

In her limited free time, she enjoyed crafting and was an avid Chicago Cub Fan.

In addition to Marge's parents and husbands, she was preceded in death by two brothers, William in 1987 and Rudolph in 2010.

Funeral Services were held on Monday, December 21, 2015. A Mass of Christian Burial was celebrated at St. Anthony Catholic Church, followed by entombment in All Saints Mausoleum. In lieu of flowers, memorial remembrances to Hawthorne Hollow, 880 Green Bay Rd., Kenosha, WI 53144 or to the Wisconsin Slovak Historical Society, P.O. Box 100164, Cudahy, WI 53110 would be appreciated.