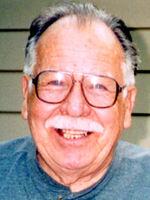 Dominick J. Salerno passed to eternal life on Friday, September 30, 2011, at United Hospital Systems Kenosha Campus, with his loving wife and daughters at his side.

Dominick was born to Pietro and Josephina (Aversa) Salerno on March 23, 1923, in Kenosha. He was a first generation Italian American and was proud of that heritage. He was a lifelong resident of Kenosha, graduating from Kenosha High School in 1941, attending many high school reunions and keeping tabs on his fellow classmates. In January 1943, Dominick entered the service in the 821st Engineer Aviation Battalion. He did his basic training at Keesler Field, Mississippi. Dom was part of the land crew spending most of his tenure in the Philippines. He had many memories of the Philippines. He was honorably discharged on December 30, 1945, and attended many reunions with his Army Corps.

On January 11, 1947, Dominick married Lorraine Morabito at Our Lady of Mt. Carmel Church.

Dominick worked for the Simmons Factory Company and then when Simmons left Kenosha, worked as a Plant Guard Worker for American Motors which then became Chrysler. He retired from Chrysler in August of 1985.

In the late 70s, Dominick ran for Alderman and 64th Assemblyman. His passion for local school and city politics was a constant source of discussion with his friends and family. He assisted in the creation of the Concerned Property Owners of Kenosha. He was always interested and involved in what was going on around him.

Dominick was a member of Our Lady of Mt. Carmel Parish his entire life. He was trustee, usher, member of the Holy Name Society, and helped with many services that the parish needed throughout his life. He was a Boy Scout leader for Mt. Carmel Parish and enjoyed camping and working with the youth of the parish to succeed in leadership activities. He loved to play Bocce with friends at the Italian American Club. He also looked forward to meeting with his fellow Chrysler retirees at the southside Burger King on Wednesday mornings.

Dominick was a loving husband, father and brother. He put his family first. He was an inspiration to his family and friends because of his loyalty. He will be sadly missed.

He was preceded in death by his son, Peter, his parents and two sisters, Rose (John) Hebda and Jennie (Nello) DiLetti.

Funeral services were held on October 5, 2011 at the Proko Funeral Home.  The Mass of Christian Burial was celebrated at Our Lady of Mt. Carmel Catholic Church, followed by full military honors. Interment was private.