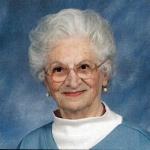 Mary Ruffalo, 92, passed away peacefully in Brookside Care Center on Saturday, March 14, 2015, with her loving family at her side.

Mary was a graduate of Mary D. Bradford High School.  She had been employed by AMC for over 35 years.  She was a very active member of the Prayer Assembly House of God, the AMC 20 Year Club, and UAW Local 72 retirees.  On December 6, 1986, she was united in marriage to Carl Ruffalo who preceded her in death on August 1, 1993.  Mary was an avid bowler and bowled in many leagues in her career.  She enjoyed watching major league baseball –  especially the Brewers, Cubs, and White Sox – and was an avid Packer fan.  Mary was an excellent baker and cook.  She was known for her banana bread, Bacala and good Italian salad.  She was kind and generous to everyone.  Mary always had a smile.  She will be deeply missed by all who knew and loved her.

Surviving are her brother, Chuck (Mary McDermand) Lento, of Lake Bluff, IL; her devoted nieces and nephews, Deborah (Dan) McGovern, of Kenosha, Diana (Jeff) Werwie, of Mt. Pleasant, Deena (Rick) Leys, Ellen Janota, and Robert (Mary) Lento, all of Kenosha, and Charlene Whitney, of Atlanta, GA.  Her great nieces and nephews, as well as her great-great nieces and nephews also survive her.  In addition to her parents and beloved husband, Mary was preceded in death by her brothers, Frank, Sam, and John Lento, sisters, Millie Whitney, Sidora Murphy, Viola Coleman, and her nephew, Stephen Whitney.