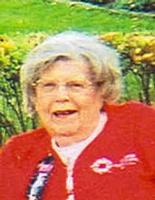 Rita Neergaard Hansen, 96, of Kenosha, passed away Sunday, June 21, 2009 at UHS KMCC.
Born on November 18, 1912, in Kenosha, she was the daughter of the late Christian and Olivia (Poulsen) Neergaard.

Rita attended local schools, graduating as Valedictorian from Lincoln Junior High School, and as Salutatorian from Kenosha High School.  For several years she was employed in Civil Service with the United States Government, most of which was with the State Department, both in Washington, D.C. and in Foreign Service, during WWII in Reykjavik, Iceland, and in Stockholm, Sweden and after the War in Copenhagen, Denmark.

On December 29, 1950, she married Roy J. Hansen in Kenosha. Following her marriage she enjoyed a rich and fulfilling life as a homemaker.  Rita was a member of St. Mary’s Lutheran Church, Danish Sisterhood Lodge No. 20, and the JBH Club, a group of women who have met since they were young girls in 1931.

In her life, Rita was devoted first, to her faith, and, second, to her Danish heritage. Recently, she was honored by The Danish Immigrant Museum at a luncheon held in Kenosha.

Survivors include her brother-in-law, Kenneth E. Hansen, nieces, Patricia Oldenburg, Gail Tefts and Susan Benson, and her nephews Richard Walker, David Walker and Jon Walker, and many other relatives and good friends.

She was preceded in death by her husband, Roy, in December of 1991, her sister, Kirsten and a brother, Clarence in infancy.