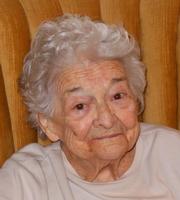 Mrs. Shirley M. Brennan, 95, of Williamsburg, Va. Born Aug. 13, 1919, in Kenosha, Wis., to the late Guy H. Johnson and Lucille D. Orvis Johnson. Due to cardiac arrest, Shirley was transported from Spring Arbor Assisted Living in Williamsburg to Riverside Doctor's Hospital in Williamsburg, where she died on Monday, July 13, 2015.

On August 28, 1943, she married Thomas W. Brennan, Jr., at First Congregational Church, Kenosha, Wis., of which she was a lifetime member. She attended Kenosha schools, graduated from Mary D. Bradford High School and Kenosha College of Commerce. While living in Kenosha Shirley, participated in many activities of the church and local groups including PTA, scouting, golf, bridge, and a variety of social clubs.

On April 7, 1975, Shirley's maternal family was awarded a certificate by the Kenosha County Historical Society honoring them as a Century family of Kenosha County, Wis., being a direct descendant of John Mills Orvis and his wife Anna Larrabee Orvis date of arrival to Kenosha County in 1843.

After living retired for several years in Fairfield Glade, Tennessee, and the sudden death of her husband on November 2, 1983, Shirley decided in 1990 to leave Tennessee and move to Virginia, nearer to her son to make a new life for herself. During her travels she made many wonderful friends and loved them all.

Shirley's life over the years was an active one, she loved her family and her home. While away from her Kenosha Church she belonged to Kingsmill Chapel, the Kingsmill Women's Social Club, several quilting groups, book club, bridge club, and as an avid golfer played with the Ladies 9 hole Kingsmill golfers until age 88. She enjoyed volunteer work at her churches in Kenosha, Fairfield Glade, and Williamsburg and her favorite pastimes included reading and keeping in touch by writing letters to friends and relatives.

Surviving is her son, Jeffrey D. Brennan and his wife, Nancy, of Williamsburg, Va.; a grandson, Todd M. Brennan and his wife, Denise, of McDonough, Ga.; a great granddaughter, Kailee, of McDonough, Ga; and a great grandson, Stephen, of Santa Barbara, Calif.; two first cousins, Verle Swenson of Camp Lake, Wis., Harry Swenson and his wife, Ginny, of Barrington, Ill.; and Andrea Hinds of Kenosha and Eden Schmitt of Ames, Iowa; daughters, of Shirley's late cousin, Janet May of Kenosha, Wis.; as well as many, many friends and relatives.

A visitation was held on Monday, July 20, at Hansen-Lendman Funeral Home, followed by internment at Sunset Ridge Memorial Park Cemetery.