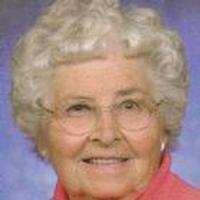 Helen Keedy, 90, of Unionville, MO, died peacefully at home on February 25, 2015. She is remembered fondly by family, friends and neighbors as a true friend and genuinely caring person who relished any opportunity to visit.

Helen was born March 25, 1924 in Kenosha, the fourth daughter of Welsh immigrants William and Hannah Jane (Rees) Roberts.  She was baptized at the age of 12 in the Presbyterian Church in Kenosha.  She was educated in Kenosha schools and was graduated from Bradford High School there in 1942.  She attended the Milwaukee County School of nursing for one year before her marriage to Robert I. Keedy on June 22, 1944, in Wauwatosa, WI.  He preceded her in death on April 29, 2005.

Helen and Bob spent much of their lives on the family farm southeast of Lucerne, Missouri with the exception of a short time in Kenosha, Lombard, IL, and Abbotsford, WI.  In 1972 the couple moved to Washington, IA, where Helen worked as a personal secretary at the Crane Company.  She also served as Commodity Foods Distribution Director in Unionville, MO, from 1968-72.  After retirement in 1989, Helen and Bob returned to the Lucerne farm and also enjoyed snowless winters at Gulf Shores, AL, where she made many new friends with whom she kept in touch throughout her life.  In 2004 they moved from the farm to their home in Unionville.

Helen enjoyed gardening, knitting and especially cooking and baking for her family and friends.  She kept fit with regular water aerobics classes in Princeton, MO and could be found almost every Thursday afternoon playing cards with friends in Unionville.

Besides her husband she was preceded in death by her parents and three sisters.

Funeral services were held on February 28, 2015 at Playle and Jones Family Funeral Home in Unionville, MO, followed by interment in the Unionville Cemetery.