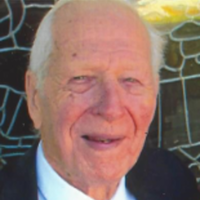 He was born in Waterbury, CT, on June 27, 1919.  He moved to Kenosha, WI, when he was a child and graduated from Bradford High School in 1938.  Richard was a shift supervisor for American Brass during World War II, and he attended the University of Wisconsin afterward.  He spent his professional career working for American Motors Corporation in the experimental engineering department.  Upon retiring he moved to Florida.

Richard was an Episcopalian and belonged to St. Anna of Grace in Seminole.

He is preceded in death by his first wife, Blanche, and his daughter, Claudia.

Richard will always be remembered as an amazing husband, father, grandfather, and great-grandfather.

Donations made be made in his memory to Suncoast Hospice.

The service is to be held at a future date.