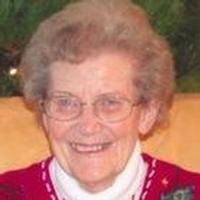 Betty was educated in the schools of Kenosha. She was the female valedictorian in the January class of 1948 at Kenosha High School.  Betty is a commissioned Associate in Ministry in the ELCA.  She helped facilitate six senior centers in various churches around the city.  She organized and was director of the first church-based Senior Citizen Community Center in Wisconsin, St. Mary's Lutheran Friendly Center for 19 years.  They served lunch, and had monthly tours, several of which were extended trips. They covered all the states, the provinces of Canada, the Yucatan, and the northern countries of Europe.

Betty was an active community advocate for volunteers, a charter member of the Kenosha Hospital Auxiliary, volunteered for the first group in Kenosha called FISH who chauffeured seniors and handicapped to medical appointments and grocery shopped, was on the first board who originally worked to get the Department of Aging in Kenosha and the noon lunch program.  She organized a social group of single young people, which is still active at another Lutheran Church and a group of seniors called SOS.  She was a charter member of Mended Hearts at Kenosha Hospital and was on the executive committee.  Betty was a member of the Kenosha Bradford Alumni Association, serving on the board for over 30 years, president for five years and secretary for eight years.  She also organized her Class of 1948 reunions for many years.  Betty was a member of St. Mary's Lutheran Church.  She was an avid reader.

Her two brothers, Niels and Anker Adelsen precede her in death.  Funeral Services for Betty will be held on Monday, December 29, at 11 a.m. at St. Mary's Lutheran Church, 2001 80th Street.  Private interment will be at Sunset Ridge Memorial Park.  Visitation for Betty will be held on Sunday afternoon from 2 p.m. to 5 p.m. at St. Mary's Lutheran Church and again on Monday morning from 9:30 a.m. until time of service. Memorials would be appreciated to the charity of one’s choice in Betty's name.

If you have a story to share about Betty, please share with the family in the Online Memorial Book.