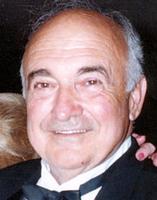 Samuel John Rizzo passed away at home on February 18, 2012, at the age of 91. Sam’s last words were “I have a secret” as he quietly passed away in his reclining chair while being massaged by his daughter Peppy, watching his favorite home improvement show with his son Paul, and on the phone with his daughter Renee.

Sam was born on September 10, 1920, in Kenosha to Mary Chiodo and John Rizzo and was the 6th of 10 children.  At an early age he began contributing to the family - - a pattern that he would continue over the next eight decades. He helped around his father’s grocery business and his brothers bicycle shop until the Great Depression struck.

As a youth he began as a shoe-shine boy on the streets of Kenosha. During high school he was running a successful newspaper stand with his brother on the corner of 56th street and Main. He was street smart and knew which customers would give him the 2-cent tip on the 3-cent paper.  His greatest passion throughout his life was woodworking and building; a bug that hit him early in life while watching his father construct the building for the family grocery business on 52nd street.  Sam used his woodworking skills to earn extra money. One of his favorite stories was building a fruit stand in his parent’s basement. It turned out to be too large to get it out so he calmly cut it in half and reassembled it outside. Nothing as simple as a doorway was going to stand in the way.

He went to the Kenosha Vocation School after high school to learn welding.  He was on his way to joining the Army to support the war effort when he was asked to fill in for a welder at the Kenosha Airplane Engine plant.  Because his welding skills were so good, he was immediately employed as a Master Welder performing the delicate job of welding fuel lines onto airplane engines.

He was a good looking kid; some said a young Frank Sinatra. Carmen Quilici thought so too. They met in high school and she most enjoyed that he worked at the Vogue Theater and spending free afternoons working on the school yearbook where he was a staffer.

They were married after a long courtship, but only after Carmen’s a brother in-law, Andy Kreuser, got fed up waiting and booked a wedding hall.  Carmen’s mother made the wedding and bridesmaids dresses.  Together, Carmen’s five sisters and one brother, and Sam’s four bothers and four sisters, became one huge family group, often sharing time with each other.   The wedding was held August 6, 1949, at St Anthony’s; one of the hottest Augusts on record.

After the war, Sam worked in the Nash foundry.  During his “spare time” helped build homes for three of his brothers, sold insurance and real estate and built an office building for Dr. Bilak who has been a lifelong friend.  Whenever there was a building project underway you could bet to see Sam lending a hand and offering advice; which of course meant that it was being done his way.

Daughter Renee was born in 1951. The story that’s told is that Sam and Carmen’s newly born daughter was often present on site while Sam was building their soon-to-be family home.  After working all day at Nash, Sam would work on the house late into the evening.  Renee kept the project on schedule by crying if she didn’t hear the sound of hammering.  For those of you who know Renee, this is why she too likes things done her way.  The twins Paul and Paulette were born in 1957, and the family was complete.

Carmen and Sam were a good team.  She was the designer, and Sam the builder.  When Carmen had the dream of opening a contemporary furniture store in Kenosha, Sam, the family, along with long-time friend Don Crucianelli, built Scandinavian Design. Over the years many of their employees became close friends and “semi-family members.”  Renee, Peppy, Paul and their families want to express their appreciation to Terri, Shelly and Dale – you made Sam and Carmen’s life complete and for that we are grateful.  You were a big part of the quality of their lives.

Sam was probably most well-known to thousands of American Motors and Chrysler employees as “Sam the Guard.”  He retired from Chrysler after 45 years, working in Plant Security.

After retirement he worked full time at the store. He enjoyed the many customers and the variety of challenges.  From hanging draperies to delivering furniture, Sam always made sure that their customers were satisfied.  Even into his 80’s, and although unable to deliver the furniture himself, he drove the truck to make sure the job was done right.

After losing Carmen in 2004, Sam focused on the business and spending time with his friends. For the last few years Sam needed a little help at home. Two very loving and dedicated caregivers gave him the respect and the quality of life he deserved. The family expresses their deepest gratitude to Jakkye and Angel. You were there until the end and made him feel safe and secure.

You can’t ask for anything more from life if, as the end nears, you can think back with few regrets.  Were you a good father and husband?  Did you treat your friends well?  Were you there for others?  This was certainly true for Sam.  He was at peace with what he had accomplished, the people that he influenced, and the life that he led.

He did make one observation though – “Houses with flat roofs leak.”

He was preceded in death by wife Carmen and seven brothers and sisters.

Funeral services were held on February 24, 2012 at the Proko Funeral Home, followed by interment in St. James Cemetery.