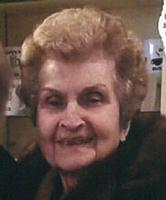 Ruth Bishop Smith passed away peacefully on Monday, April 13, 2015 at the age of 99 at Home Inspired Assisted Living in Somers.

Ruth was born on November 15, 1915 in Kenosha, the second of four children born to Harry and Edna (Barrows) Thompson.  Her mother died when she was just 8 years old following the birth of the youngest child.  As was common at the time, her father was supported by relatives and housekeepers to raise his young family.  She lived most of her life in Kenosha County and in that time, she experienced most of the significant events of the twentieth century.

She attended Wood Road School, a one room rural school and was a graduate of Mary D. Bradford High School.  She attended the two year program with Racine-Kenosha Rural Normal School in Union Grove and received her teaching certificate.

She began her teaching career in one of the one-room schools of the Kenosha school system, which at that time required women to resign when they married.  So in November 1939, when she married Edwin Sherwood Bishop II, she resigned from her teaching position and moved to his family farm in Somers.  In July, 1946, Edwin died in an automobile accident, leaving her a widow with two small children and a farm to run.  Help with the children came from family members and help with the farm came from hired help and German prisoners of war housed near Sturtevant.

She went back to college to complete a Bachelor of Arts degree from Dominican College (Racine), graduating in 1955 and then returned to teaching.  She taught at Sunnyside School (now Grewenow) until her retirement in 1971.

In July 1971 she was united in marriage to Paul Smith and moved into Kenosha.  Together they enjoyed traveling, dancing and family activities.  He preceded her in death in 1984.

Ruth was known for her candor, dependability and generosity.  She had a strong belief in education and commitment to community.  She was very proud of her family’s long connection to the area, including the Somers United Church of Christ, of which she was a senior member.

She was an active volunteer and during her life, she was a member of several organizations, including book clubs, Homemakers, the Ladies Aid Society at church and Phi Epsilon Omega, an educational philanthropic organization.   In1962, she began volunteering at Kenosha Hospital, amassing over 10,000 hours by her retirement at age 94.

She also found time to do volunteer work in Reading and Learning Disabilities Classrooms in Kenosha for several years following her husband’s death.

A strong believer in the value of education, she recently endowed a scholarship at Lakeland College in honor of her sons.

The family wishes to thank the staff at Home Inspired Living and Hospice Alliance for their professional and attentive care.