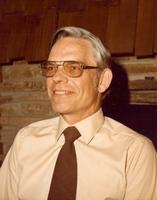 Albert William Boehme passed away on Sunday, May 29, 2011 at the Bountiful Life Care Center in Bountiful, Utah where he had been living for the last two years near his daughter Barbara.  Born in Gillespie, IL on August 9, 1930, he was the son of the late Adolph and Paula (Jubelt) Boehme.  Al spent his formative years in Kenosha, WI, where he graduated from Mary D. Bradford High School.  He attended Park Side Technical College before being inducted into the Army for service in Korea, where he was a tank commander. Upon returning from service, he operated his own Service Station in Kenosha. On August 13, 1955 he married the love of his life; Jean Frances Langer.  Soon after marrying Jean, they moved to Madison, where Al attended the University of Wisconsin, receiving his BS in Electrical Engineering.  He started his professional life working for Olson & Evans.  He then branched out with his friend and coworker, forming Boehme and Batterman, which was later purchased by Durrant (Engineering).  Al retired from Durrant in 1992.

Al was a member of St. Maria Goretti Parish, where he was an usher for many years.  He also enjoyed helping out with other responsibilities at the church.  Al was a frequent blood donor at the Red Cross, donating platelets and over 25 gallons of blood.  Al enjoyed playing bridge with his friends, camping with his family, puttering around his house and swimming in his backyard pool.  He was a member of the Knights of Columbus.

Al was preceded in death by his parents, his beloved Jeanne (in 2000), sisters Virginia and (twin) Alberta, and brother Melvin.

He is survived by one sister, Darlene Boehme, of Wisconsin; his daughters, Sue (Mike) Knipfer of Minnesota, Barbara Boehme of Utah, Paula (Roger) Martin of Wisconsin; his grandchildren, Rebecca and Bryan Knipfer, Kelly and Erin More, Kurt and Ross Martin; his special niece Laurie (Rick) Vertz and other many nieces and nephews.